10 Best Mohanlal Movies You Must See

Mohanlal (born 21 May 1960), is an Indian actor, film producer, playback singer, television host, and film distributor who predominantly works in Malayalam cinema besides also having sporadically appeared in Tamil, Telugu, Kannada, and Hindi-language films. Mohanlal has a prolific career spanning over four decades, during which he has acted in more than 340 films. Mohanlal's contributions to the Malayalam cinema have been praised by his contemporaries in the Indian film industry. The Government of India honored him with Padma Shri in 2001, and Padma Bhushan in 2019, India's fourth and third highest civilian honors, for his contributions to Indian cinema. In 2009, he became the first actor in India to be awarded the honorary rank of Lieutenant colonel in the Territorial Army. Here we are going to discuss the 10 best Mohanlal movies you must see. To pick 10 from 340 movies is a very difficult task. Although we are trying to pick 10 movies from it. 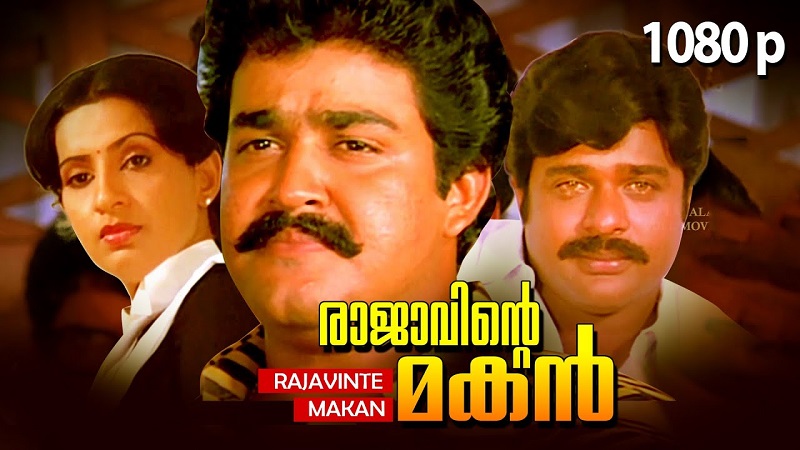 Rajavinte Makan is a 1986 Indian Malayalam-language gangster film directed and produced by Thampi Kannanthanam and written by Dennis Joseph. It stars Mohanlal as crime boss Vincent Gomes and also features Ratheesh, Ambika, Suresh Gopi, and Mohan Jose in supporting roles. The plot is based on the rivalry between underworld don Vincent Gomes and Home minister N. Krishnadas (Ratheesh). The music was composed by S. P. Venkatesh. 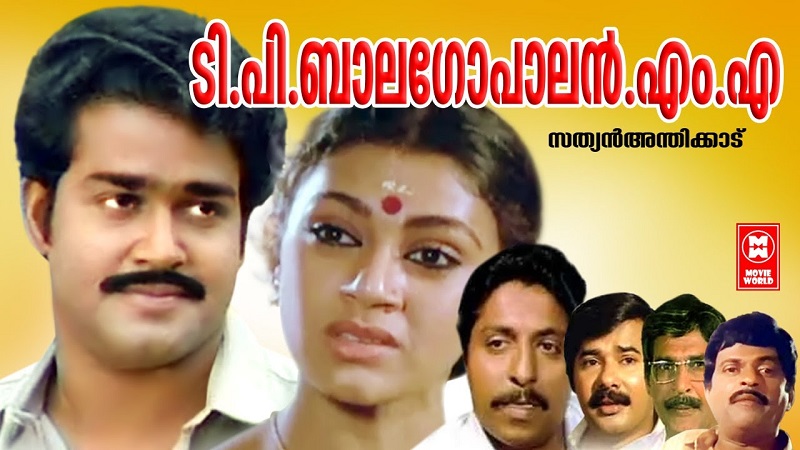 T. P. Balagopalan M. A. is a 1986 Indian Malayalam-language comedy-drama film directed by Sathyan Anthikkad and written by Sreenivasan from a story by Anthikkad. Starring Mohanlal in the title role, along with Shobana, Balan K. Nair, Kuthiravattam Pappu, Maniyanpilla Raju, Sreenivasan, Sukumari, and K. P. A. C. Lalitha. The story follows T. P. Balagopalan, who struggles to make ends meet and his romantic life with Anitha.

The film won two Kerala State Film Awards—Best Actor for Mohanlal and Best Story for Anthikkad. The film was a milestone in Mohanlal's career. 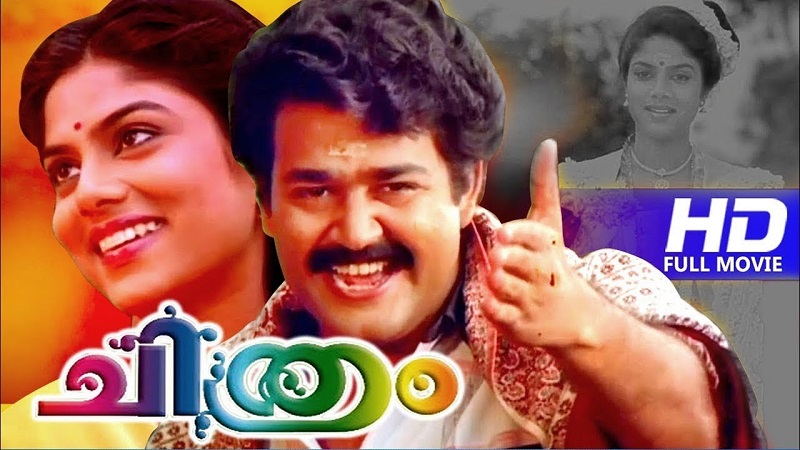 Kalyani (Ranjini) decides to marry her boyfriend Ravi (Shanavas) against her father Ramachandra Menon's (Poornam Vishwanathan) wishes. But Ravi breaks up when he learns that she would be disinherited. Kalyani's father, who stays in the United States, is unaware of the breakup and comes home to Kerala to spend time with his daughter and son-in-law. This prompts a family friend and Advocate Kaimal (Nedumudi Venu) to hire a thief, Vishnu (Mohanlal) to act as Kalyani's husband during Menon's vacation stay.

Chithram was released during a Christmas weekend on 23 December 1988. Made on a budget of ₹44 lakh, the film grossed ₹3.5 crores at the box office, becoming the highest-grossing Malayalam film at its time. 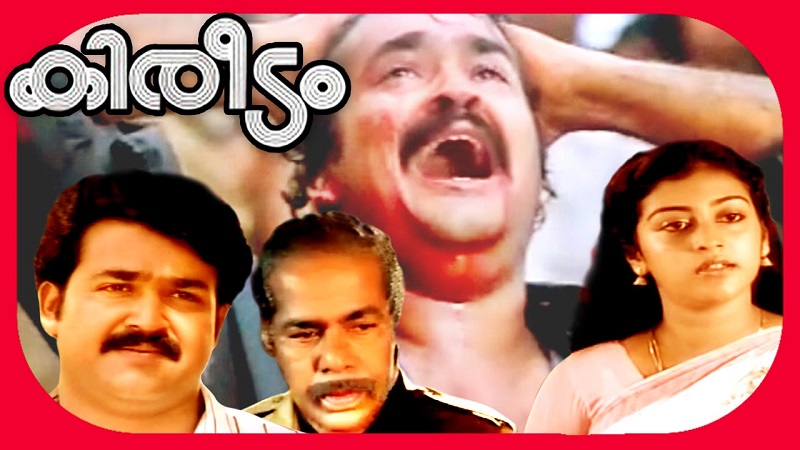 The film is about a youth, Sethumadhavan (Mohanlal), whose hopes and aspirations are shattered by a combination of fate and human falling. It explores how society type-casts individuals and forces them to act that part whether they like it or not. Mohanlal won the National Film Award – Special Mention "for portraying young man's agony and pain marvelously and in unique style". Lohithadas won the Kerala Film Critics Award for Best Screenplay. The title 'Kireedam' refers to the metaphorical crown that the villagers of Ramapuram bestows upon Sethumadhavan after he kills Keerikadan Jose.

Kireedam was released on 7 July 1989. It was a major commercial success at the box office. It received widespread critical acclaim and praise for the performances of Mohanlal and Thilakan, the screenplay, and the soundtrack. It is regarded as one of the classics in Indian cinema. A sequel to the film titled Chenkol was released in 1993. Kireedam was remade into six other languages in Telugu as Rowdyism Nasinchali (1990), in Kannada as Modada Mareyalli (1991), in Hindi as Gardish (1993), in Bengali Bangladesh as Babar Adesh (1995), in Bengali as Nayak-The Real Hero (2005) and in Tamil as Kireedam (2007) - becoming Mohanlal's first movie to be remade in six other languages. In 2007, it became the second Indian movie to be remade in six other languages after Anuraga Aralithu. 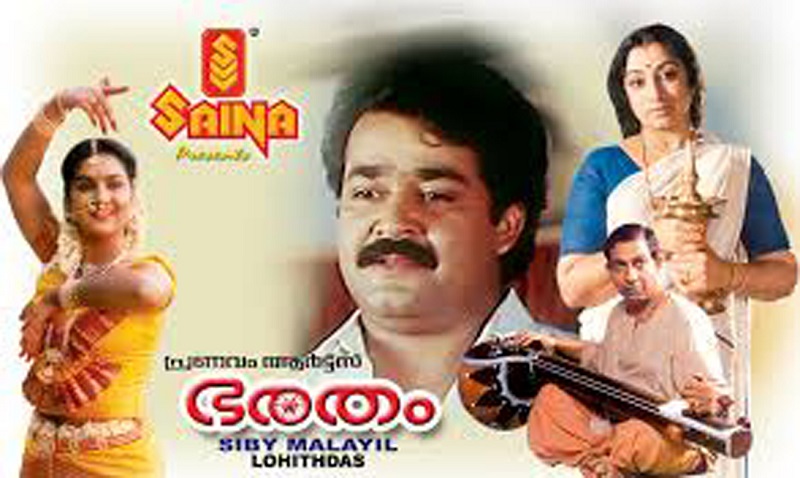 Bharatham is a 1991 Indian Malayalam-language musical drama film written by A. K. Lohithadas and directed by Sibi Malayil. It stars Mohanlal, Urvashi, Nedumudi Venu, Lakshmi, and Murali. The film was produced by Mohanlal through his production house Pranavam Arts. The film features original songs composed by Raveendran and a background score by Johnson. Bharatham is interpreted as a modern-day adaptation of the Ramayana from Bharatha's perspective. How, in the absence of his elder brother, Gopinathan takes the responsibility of the family and hides his griefs are the core of the story.

The film was a critical and commercial success. Bharatham is also noted for its music that is largely Carnatic classical and semi-classical. The film won three National Film Awards—Best Actor for Mohanlal, Best Male Playback Singer for K. J. Yesudas for the song "Rama Katha Ganalayam", and Special Mention for Raveendran's music, and five Kerala State Film Awards. On the centenary of Indian cinema in 2013, Forbes India included Mohanlal's performance in the film on its list of "25 Greatest Acting Performances of Indian Cinema". It was remade in Tamil as Seenu by P. Vasu in 2000. 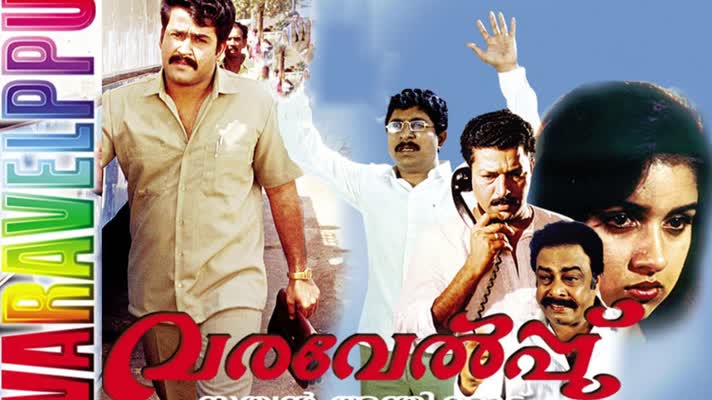 The film was based on a real-life incident in Sreenivasan's father's life. The film was an average grosser at the box office but later created a cult status and following. The movie was remade in Hindi as Chal Chala Chal. The film is also among the best Mohanlal movies of all time 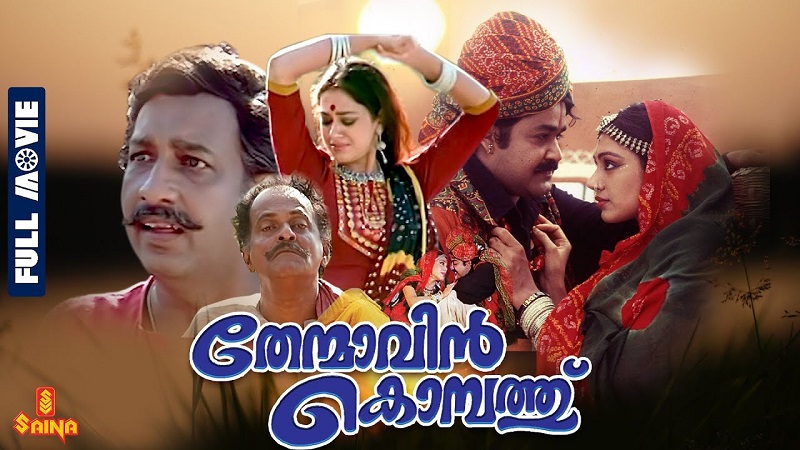 Thenmavin Kombath is a 1994 Indian Malayalam-language romantic comedy film written and directed by Priyadarshan. It was produced and edited by N. Gopalakrishnan. The film stars Mohanlal, Shobana, and Nedumudi Venu, with Kaviyoor Ponnamma, K. P. A. C. Lalitha, Sukumari, Kuthiravattam Pappu, Sreenivasan, Sankaradi, and Sharat Saxena in supporting roles. The background score was composed by S. P. Venkatesh, while the Berny-Ignatius duo composed the songs. K. V. Anand was the cinematographer.

The film performed well at the box office. The film won two National Film Awards—Best Cinematography for Anand and Best Production Design for Sabu Cyril, and five Kerala State Film Awards (including Best Film with Popular Appeal and Aesthetic Value). Thenmavin Kombath is now considered by audiences and critics to be among the best comedy films in Malayalam cinema. 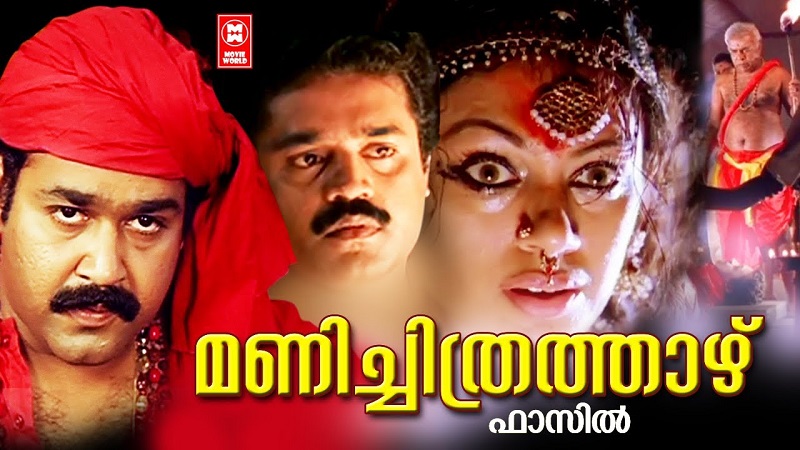 Directors Sibi Malayil, Priyadarshan, and Siddique–Lal served as the second-unit directors. The cinematography was by Venu, and Anandakuttan and Sunny Joseph served as the second-unit cinematographers, the film was edited by T. R. Shekar. The original songs featured in the movie were composed by M. G. Radhakrishnan, while the original score was composed by Johnson. The film won the National Film Award for Best Popular Film Providing Wholesome Entertainment and Shobhana was awarded the National Film Award for Best Actress for her portrayal of Ganga / Nagavalli.

The film dealt with an unusual theme that was not common in Indian cinema at the time. The film completed 319 days of run in 1 releasing theatre. Manichitrathazhu was remade in four languages – in Kannada as Apthamitra which in turn was remade in Tamil as Chandramukhi , in Bengali as Rajmohol, and in Hindi as Bhool Bhulaiyaa – all being commercially successful. Geethaanjali, a spin-off directed by Priyadarshan and Mohanlal reprising the role of Dr. Sunny Joseph was made in 2013. Manichitrathazhu is considered by many critics as one of the best films ever made in Malayalam cinema and developed a cult following in the years after its release. 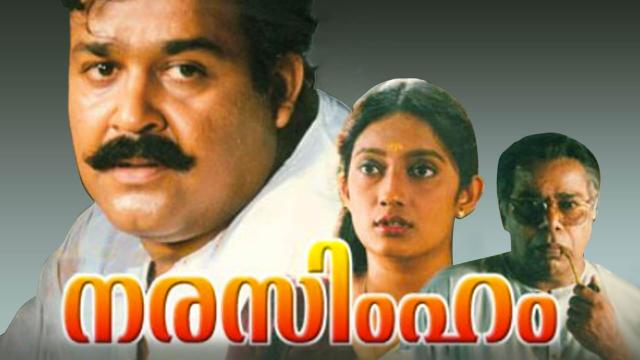 Narasimham is a 2000 Indian Malayalam-language action drama film directed by Shaji Kailas and written by Ranjith. The film features an ensemble cast comprising Mohanlal, Thilakan, N. F. Varghese, Aishwarya, Kanaka, Jagathi Sreekumar, and Bharathi Vishnuvardhan, among others. Mammootty appears in a cameo role. The film was the first production of Aashirvad Cinemas, owned by Antony Perumbavoor, the former chauffeur of Mohanlal.

The film was released on 26 January 2000, India's 50th Republic Day. Upon release, the film grossed ₹220 million (US$2.9 million) at the box office against a budget of ₹20 million (US$270,000), making it the highest-grossing Malayalam film of all time declared as Industry Hit. The film ran for more than 200 days in theatres.

The film was re-released under the name Narasimham Returns in 2014, which premiered in Dubai. It was re-released in Kerala on several occasions and still enjoys a cult following. The film was remade in Telugu as Adhipathi (2001), starring Mohan Babu, Nagarjuna Akkineni, Preeti Jhangiani, and Soundarya. 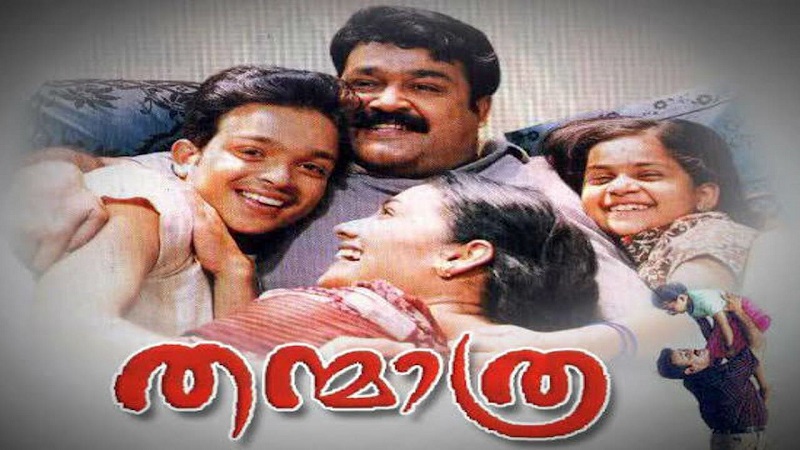 Thanmathra is a 2005 Indian Malayalam-language drama film written and directed by Blessy, based on Padmarajan's short story "Orma". It portrays the effects of Alzheimer's disease on the life of Ramesan Nair (Mohanlal) and his family. The film collected three times its budget at the box office and completed 150 days run. Thanmathra won five Kerala State Film Awards, which include Best Film, Best Actor, Best Director, Best Screenplay, and a Special Mention Award for the debutant actor Arjun Lal. It also won the Best Feature Film in Malayalam Award at the 53rd National Film Awards. The film is also among the best Mohanlal movies of all time