Ajagajantharam, A perfect visual treat for the audience 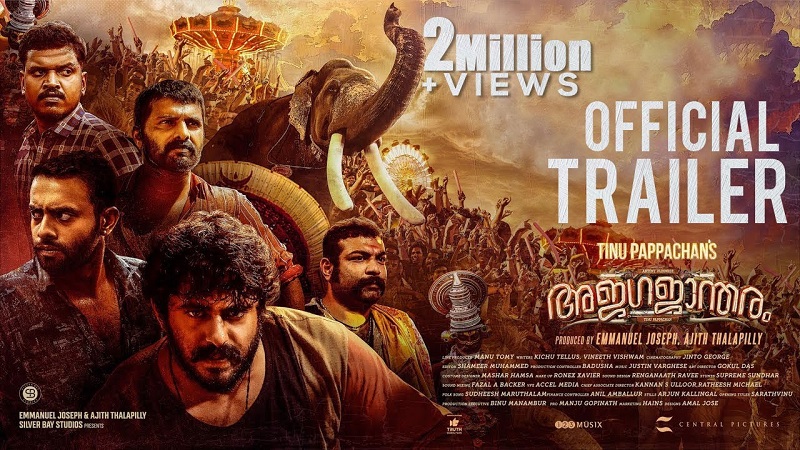 Ajagajantharam, the new film released on December 23 in the Christmas season. The main story of the film is happening around a pooram festival. Lali (played by Antony Varghese) is a troublemaker every time. He came to the pooram festival and clash with another bad guy in the village who was in the team of Kannan(played by Arjun Ashokan). Their fight turns into an ego problem and this turns into a big fight. Then Laali and his friend are locked in the middle of the villagers. The rest of the story tells, how they are handling this situation.

Tinu Pappachan is the director of the film. Both Antony and Tinu had earlier collaborated in the latter's debut directorial Swathanthriyam Ardharathriyil, which was a thriller. The film is produced by Emmanuel Joseph and Ajith Thalapilliy and the music is composed by Justin Varghese. The title for the film is given by Lijo Jose Pellissery. Ajagajantharam has been written by Kichu Tellus and Vineeth Vishwam. Jinto George is the cinematographer while Shameer Muhammad is the editor. Arjun Kallingal is the still photographer.

Ajagajantharam is packed with high-quality visuals and super fight scenes. No lady leading actresses are there in this film. The director does not go into the depth of each character. The film tells a simple plot in a convenient way. We can feel a pooram festival while watching the film. Maybe some of the viewers do not like the film due to its violent nature.

Conclusion: If you want to watch a film packed with beautiful visuals and fights, you can take a ticket for the film.